It’s a dream shared by a great number of aspiring novelists; that someday they’ll be sitting in a theater watching their characters buckle their swash on the big screen.  Browse through the interwebs and you’ll locate many an author’s website with a special section devoted to who they’d like to play their heroes and heroines.  I’m not gonna lie, I’ve had this dream myself.  It’s perhaps unorthodox to admit, but I’m more of a movie person than I am a reader.  It probably has to do with the happier memories of childhood; more of them involve sitting on the couch with my dad watching James Bond or The Natural or rewinding that one part in Star Wars where R2-D2 gets zapped by the Jawa and falls on his face to giggle at it for the nineteenth time, than involve hiding under the covers with a flashlight in the wee hours of the morning flipping pages of The Adventures of Tom Sawyer or the Black Stallion books.  But we all chart our course toward our dreams in different ways (Tele, you must be influencing me lately with these nautical metaphors I’ve become prone to).  Lately it’s been reading Percy Jackson as a family and noting how much was changed for the adaptation and thinking (blasphemy!) that the screenplay was an improvement.  Novels and movies are both in the business of telling stories, but they are drastically different media and what works in one fails utterly in another (see:  Tolkien purists’ criticism of the changes in the Lord of the Rings movies).

Nicholas Meyer, the director of Star Trek II: The Wrath of Khan, in his excellent DVD commentary for that film, talks about the limitations of certain forms of art:  a painting does not move, a poem has no pictures and so on.  The person experiencing the art has to fill in the rest with his own imagination, his own personality.  Only movies, says Meyer, have the insidious ability to do everything for you.  What does that say about the creative process of someone who writes a novel having been apprenticed largely in cinematic technique?  When I’m writing fiction, I’m going at it from two different angles.  On the one hand I love wordplay and the sound of wit and a phrase well turned.  On the other, when I’m staging a scene I’m picturing it in my mind as though I were directing it.  My first draft involved a lot of mentions of character movement – turning away, turning back towards something else, entries and exits from the stage as though they were actors shuffled about by a beret-wearing and megaphone-wielding auteur in his canvas chair.  I’m basically writing the movie I see in my head, with the dialogue timed the way Aaron Sorkin does it, by speaking it out loud and judging its flow.  (I do write a lot of – and probably too much – dialogue, but, without trying to sound immodest, it’s what I’m good at, and to me, there is no better way for characters to get to know each other and to reveal themselves to the reader.  I almost wrote “audience” there; see how the two media are so irrevocably intermixed in the recesses of my brain?)

I’m much lighter on physical character description, however, and I give just enough to establish those traits that are, in my mind, crucial (you may disagree).  I’d rather that you cast the part yourself.  You probably won’t see my protagonist the same way I see her, and that’s totally fine.  In fact, it’s against my interest as someone who is trying to captivate you with my story to tell you how it should look in your mind, and that your interpretation is dead wrong because I made her up and she’s mine and so are all her subsidiary rights.  You need to be able to claim her too.  With that in mind, I’m happy to let you indulge in your own speculation once I let the story out into the world but I’ll never tell you who I think should play her.  Let’s be mindful of the tale of Anne Rice, who famously blew a gasket when it was announced that Tom Cruise would be playing Lestat in Interview with the Vampire, only to publicly recant and offer Cruise heaps of praise after she saw the actual movie.  Besides, if we ever get that far, authors (unless they’re J.K. Rowling) have zero say in who plays whom.  Often the real world gets in the way anyway – the preferred choice either isn’t interested or isn’t available.  There’s also the possibility that you don’t get your dream cast but you end up with somebody better.  I seem to recall that on Stephenie Meyer’s website years ago she talked about wanting Henry Cavill (the new Superman) to play Edward Cullen; without getting into my opinion of the quality of those movies it’s probably fair to say that no one among the many Twihards of the world was disappointed with landing Robert Pattinson instead.  (Truthfully, had it actually been Cavill they would have lusted over his smoldery-eyed poster just as much.)

What, then, is the point of the preceding rant?  As the chairman of the British “Well Basically” society would say:  well, basically, I think authors and aspiring authors do their readers a disservice when they talk about who they’d like to see play their characters in a hypothetical big screen version.  Even though it’s usually done all in fun, that interpretation gets taken as definitive since it’s coming from the creator, and any ideas the readers and fans might have had, imaginative as they might have been, are immediately supplanted because, you know, the guy who actually made it up has spoken.  It was like when Harry Potter merchandise first hit the shelves and all the kids who had until that point been making their own creations out of spare cloth and construction paper now settled for making their parents buy the officially licensed, made in China plastic crap.

So, in the unlikely event that someone someday wants to make a movie about something I’ve written?  Don’t ask me who I’d cast; my own counsel will I keep on that matter, young padawan.  I’ll be perfectly happy so long as they find a role somewhere for this lady: 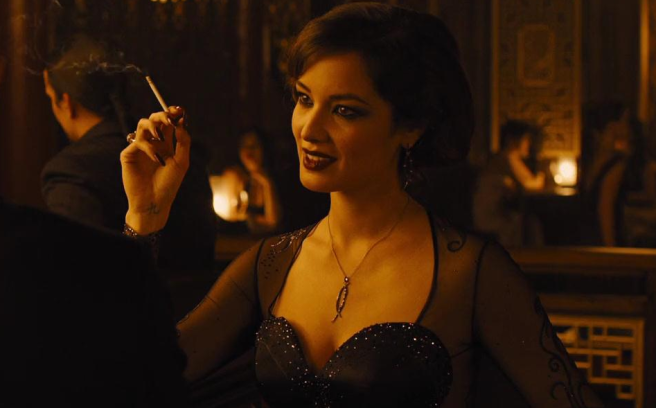 One thought on “Novelists and central casting”