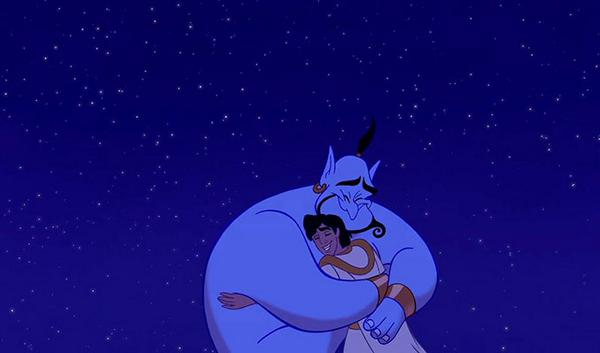 Blessed are the mirthmakers.  Watching my Twitter feed yesterday and today run over with warm anecdotes about Robin Williams, shared by both his celebrity friends and everyday people whose circle he might have wandered into one happenstance moment, was a testament to the inimitable imprint he will leave upon a troubled planet hungering for the levity that lets it aspire to a brighter day.  He was a treasure we didn’t often stop to realize we had; star power having waned somewhat in recent years, movies no longer top box office draws, forays back into television cancelled after a solitary season.  Now that he is gone, we recall only the highlights, the best of a legacy burned into collective memory and visceral lines of brilliant, often improvised dialogue we’ll appropriate for our own.  Williams’ unique rapid-fire, free-associating comedic patter was like a brain overloaded with all the world’s data, obsessed with identifying the connections in pursuit of a grand design just one perfectly-timed quip out of reach.  “Genius” was not hyperbole for describing his talent.

The outpouring of good feeling seen across all forms of media is reassurance, one hopes, that Williams will be remembered for the man he was and not only by how he died.  Hundreds of articles and blog posts have already appeared attempting to reconcile the contradiction of a man who could quite legitimately be labeled the funniest person on the planet being consumed by depression.  It seems that so many of our jesters are.  They understand on an analytical level why the joke is funny, they can see other people expressing the expected reaction, but they can’t join in the feeling, because an illness bars the way like the world’s cruelest bouncer behind a spiked red velvet rope – this far and no farther shall ye come.  The clown who does not know laughter himself is one of our greatest tragedies; so too it seems would Robin Williams become perhaps the most literal example of this archetype, struggling with the dual demons of mental illness and substance abuse throughout the decades of a career dedicated to lifting the spirits of millions.

When my family bought our first Betamax VCR, for what seemed like a good year, we had a mere two movies, on the same cassette:  Caddyshack and Popeye.  The former I could take or leave, but I loved Popeye, as silly and as ill-conceived as a grownup’s eyes can see that it is.  The opening scene where the titular squinty-eyed sailor rows into the seaside town of Sweethaven, inquires at the Oyl residence about a “room fer rink” and tucks himself into bed while looking fondly at a picture of his father (which is an empty frame with the words “ME POPPA” scrawled on it) was by turns funny, weird, and ultimately endearing, somewhat emblematic of Robin Williams’ work.  Rolling on the floor at the zaniness and the audacity and moved to gut-wrenching sobs in the next.  Ironically, for someone who made his name in comedic mugging, Williams always knew when to pull back and let someone else have the spotlight.  In Awakenings, he dialed back his charisma to let Robert De Niro drive the movie with a touching portrayal of a recovered catatonia patient experiencing a new world.  He let Matt Damon become a movie star in Good Will Hunting and won an Oscar in the process, crafting a gripping performance with subtlety and rigid control of that inexhaustible manic energy.  Williams himself might have admitted that some of his movies over the last few years have been less than stellar, but you’ve never gotten the sense that it was because of a lack of trying on his part.  In his acting roles, no matter the genre, he left it all out on the field.  Perhaps it was this incredible commitment to put out so much energy for everyone else’s benefit that there wasn’t enough left for himself.

His passing brings into light as well our ongoing inability to equate the frequently invisible illnesses of the mind with the obvious illnesses of the body, in how we treat them and even how we think of them.  As Alistair Campbell illuminates so well in his HuffPost piece, we regularly laud cancer patients for their courage while in the same breath telling people with depression to suck it up – or express incredulity that someone who appears to “have it all” could ever find anything to be depressed about.  I’m beginning to wonder if it’s simply a question of etymology, where depression the illness is negatively impacted by the non-medical concept of feeling depressed.  Maybe if it were assigned some elaborate sciency-sounding moniker like “Fleckstein-Johner reductive cerebral neural syndrome,” individuals suffering from it might receive more empathy from those who don’t have it.  And yet so many do – one in five, according to recent statistics.  (According to WordPress, as of my writing this there are 3,357 people following this blog, so 672 of you likely suffer from some kind of mental illness.  That is enormous, and saddening at the same time, and evidence that there is so much work to do to alleviate the stigma.)

The lexicon around the ending of one’s own life is similarly tinged with judgments.  “Committing” suicide draws the implied comparison to perpetrating a crime; as does referring to someone as a “victim” of suicide.  Thinking of suicide as “giving up,” or that the person “just couldn’t fight anymore,” and that they made a conscious choice to die.  In no other example of an illness do you hear offensive phraseology that assigns blame to someone who has suffered.  When Amy Winehouse died a few years ago there was no shortage of people claiming with clucking tongues that “well, she was clearly headed that way.”  Try saying that about someone who dies of leukemia (and then duck).  Yes, depression can be a fatal disease, and as much as we might enjoy comforting ourselves with fantasies of last-minute interventions (insisting over and over again that “it’s not your fault,” as in a famous example from Williams’ own work) the plain ugly truth is that those triumphant hug-filled finales are for the movies.  Just as some cancers can’t be cured, many cases of depression aren’t either.  Robin Williams tried his best, working through treatment throughout his life, but in the end, he died from an illness, just as if he’d had a particularly virulent physical tumor.  Nothing more and nothing less.  Those who knew him and the millions more of us who merely admired him from afar and relied on him to make us smile when we were down should simply celebrate who he was, and be grateful that we were able to share in his gifts for a short time.

Apparently there are three Robin Williams movies in post-production awaiting release, but it’s strange to think that after they have come and gone, we will not see any more.  His is a legacy of goodwill, of being a force for hope, kindness, and charity; of giving to his fellow human beings far, far more than he ever took.  As the Academy of Motion Picture Arts and Sciences put it yesterday, the Genie is free now.  We will miss him, but we’ll always have the laughs.  So instead of black armbands, let’s don red clown noses, jump up on our desks and recite a few lines of “O Captain!  My Captain!”  That’s probably just how he’d want it.