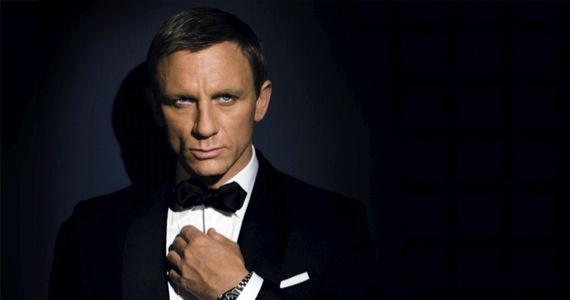 “Oh please, James, spare me your Freud.  One might as well ask if all the vodka martinis ever silence the screams of all the men you’ve killed.  Or if you’ve found forgiveness in the arms of all those willing women… for all the dead ones you failed to protect.” – Alec Trevelyan (Sean Bean) to James Bond (Pierce Brosnan) in GoldenEye

After four years of speculation, rumor, tabloid nonsense and the customary story about the Bollywood flavor-of-the-month who is “perfect” for the female lead and the “desperate” choice of the producers, the truth is out.  The 23rd James Bond movie, SkyFall, started shooting on November 3rd.  Oscar-winning director Sam Mendes reteams with Daniel Craig after their collaboration on Road to Perdition, and brings along for the ride the most incredible cast ever assembled for a James Bond movie:  Javier Bardem (Oscar winner for No Country For Old Men), Ralph Fiennes (Oscar nominee for Schindler’s List among other things), Albert Finney (four-time Oscar nominee and star of the Best Picture winner Tom Jones) along with Judi Dench and the two new ladies – French actress Berenice Marlohe and Pirates of the Caribbean star Naomie Harris.  Longtime Coen Brothers collaborator Roger Deakins is the cinematographer and Stuart Baird handles editing.  The script is by Bond veterans Neal Purvis & Robert Wade and Gladiator writer John Logan, based on a premise by The Queen screenwriter Peter Morgan.  With all that talent it would take an act of Satan himself to forge an A View to a Kill-style misfire.  Then again we haven’t heard who’s doing the theme song yet.  Is Shirley Bassey still available?

About the plot, little is known beyond the postage stamp synopsis released by the production team – basically, that Bond finds himself fighting to save MI6 after a dark chapter of M’s past comes back to haunt them both.  When Judi Dench was first cast as M for Pierce Brosnan’s Bond debut GoldenEye, much was made in the entertainment press of the idea that a woman was taking over as the boss of the most chauvinistic of all cinema spies (sorry, Austin Powers.)  However, throughout the four-film Brosnan era, apart from a few sparse touches the relationship between Bond and M was not played that different than it had been with Bernard Lee (or to a lesser extent, Robert Brown) in the past.  Beginning with Daniel Craig’s tenure, the producers have opted to treat the relationship differently.  Obviously with an actress of Judi Dench’s caliber you don’t want to limit her to sitting behind the office desk and disappearing after the first act.  In expanding the character of M, the producers have created a more maternal bond (pardon the pun) between her and her star agent.  Indeed, their relationship is unique in the 007 universe, as M is the only woman who does not see Bond sexually (the reverse being true as well.)  When Bond was broken in Casino Royale by his betrayal by Vesper Lynd, and set out to bury his demons in Quantum of Solace, his loyalty to M remained.  Indeed, when one thinks of Bond as doing his duty for queen and country, it is not necessarily Her Majesty Lilibet Mountbatten-Windsor he is thinking of first.

Bond movies can be a curious entity.  In many of the more forgettable entries there was little attention paid to character development or emotional engagement.  It was just a fun ride.  And that’s fine if that’s all you’re looking for.  Clearly it worked or we wouldn’t still be talking about it 50 years on and 23 films later.  As the second generation of Bond producers has gotten older and responded to the changing audience, and in particular seen Bond struggling to stay afloat in a field swarming with imitators of the genre it essentially spawned, they have come to realize that the character of James Bond has considerable depth worth exploring.  Who is he?  What drives the core of this man whom men want to be and women want to be with?  Consequently the producers have tried to craft plots that are emotional journeys inasmuch as they are excuses for implausible action scenes.  Sometimes with mixed results.  The World is Not Enough was the first real attempt in the modern era to make a character-driven Bond movie and the elements did not blend together well – rather like a martini where the proportions of vodka and vermouth were just slightly off.

Some Bond fans balk at the character-driven approach, suggesting, and not unreasonably, that not every mission needs to be personal.  But I’ve maintained that that resonance is the crucial meat and potatoes alongside the chocolate and the whipped cream.  We need to begin to care about the people on screen, about Bond, as opposed to just watching him do cool stuff.  That cool stuff will always be essential to Bond – one would not necessarily care to see him simply talking about his problems on a psychiatrist’s couch for two hours – but probing into his soul takes it from the realm of popcorn movie into that of real cinema and makes it a truly memorable experience.  I suspect that with the above-the-line talent who have been brought on to shape SkyFall, the producers are aiming for just that.  Of course they want to make a great entertainment, but let’s have a little something for the grownups too.  I think Ian Fleming would be ok with that (actually, he would have flipped out at the suggestion of a female M, but I won’t tell him if you don’t).