Reza Aslan has had an interesting week in the limelight.  A few days following an appearance on Real Time with Bill Maher, he became the newest viral video sensation when an “interview” he did/was subjected to on Fox News garnered an impressive level of coverage, for both the stupidity of the questions he was being asked and his unflappable calm in responding to them; akin, as some have observed, to a teacher instructing a babbling child.  As he mentions in the clip, Aslan is an impeccably credentialed academic who has made a career of studying and writing about religion, and so, to be interrogated repeatedly by a person whose education beyond fourth grade is dubious (at least based on this clip), “why does a Muslim want to write a book about Christ?” is probably the intellectual equivalent of being asked who he’s wearing on the red carpet tonight.  The embarrassing affair veers further of the rails when she begins badgering him about why he hasn’t revealed that he’s a Muslim before (he has, on multiple occasions), as she panders to that sizable portion of the Fox demographic that presumes Muslim = al-Qaeda.  The blatant anti-intellectualism would be galling if it weren’t so unsurprising, if one did not have to assume that the interviewer’s questions were prepared and approved enthusiastically (with frat boy giggles, in all odds) by a cynical producer seeking to perpetuate an insular, terribly biased view of the world for the benefit of Fox’s ratings.

Bill Maher is fond of pointing out that conservatives live in a bubble where they cannot accept anything that challenges how they choose to view the world.  It is quite possible the person conducting the interview with Aslan was so committed to this mindset that why a Muslim would write a book on Christ simply would not compute.  When you sacrifice the scary world of the unknown for the comforting confines of dogma, of course the curiosity of others becomes impossible to understand.  That’s why you get members of Congress (on science and technology committees, of all things) claiming defiantly that we don’t need to worry about global warming because God promised Noah he would never flood the world again.  But this notion that one should stay inside the lines, refrain from asking questions about things we don’t understand and (horrors!) actively explore topics that interest us despite their seeming to have no relation to our own lives, goes against the very notion of human progress.  If we don’t venture out of the cave we don’t discover fire.  If we presume that the earth is flat and there is nothing beyond the ocean sea, I’m writing this post in England right now (actually, I’m probably scrawling it in ink on parchment).  If we accept that the moon is made of green cheese we don’t have Apollo 11.  We have to ask questions about things that are foreign to us.  We have to examine viewpoints that contradict ours.  In the case of persons of faith, it’s what strengthens that faith – for unchallenged it is not faith at all.  For those of us who choose not to walk the religious path, it’s gathering those elusive nuggets of truth that help us sort out our own thoughts on What It’s All About.  And that sometimes means examining religion too, even if Fox News can’t understand why we would do it.  Curiosity is a trait borne of hunger, from a dissatisfaction with the distasteful notion of accepting things as they are.  Being unwilling to accept limits.  Curiosity is what makes us smash through those limits with an iron fist and reach for what’s hidden on the other side.  You never know, it might be something good.

We are fortunate to be living in this time, when the world has geared itself like a finely-tuned clock toward the indulgence of curiosity, when information is readily available to those who seek it out.  The human thirst for progress has led us here, centuries from the era when the Fox News illiterati whom we now laugh at with millions of snarky voices were once those who would have had us burned at the stake in a heartbeat for uttering a single syllable against their ridiculously narrow view of the cosmos.  Millions of opinions on just as many issues are published every single day and we are free to sort through the noise to find the songs we want to add to our ever-expanding repertoire.  Why would a Muslim want to write a book on Christ?  Because he can.  And we should want to read it for the same reason (in a happy ending for him, Aslan’s book Zealot has hit #1 on Amazon’s rankings this week).  That’s how we learn.  Which, one supposes, is the real danger to the folks like the purveyors of Fox News who rely on closed minds to replenish their bank accounts – fill a bubble with too much knowledge and it bursts. 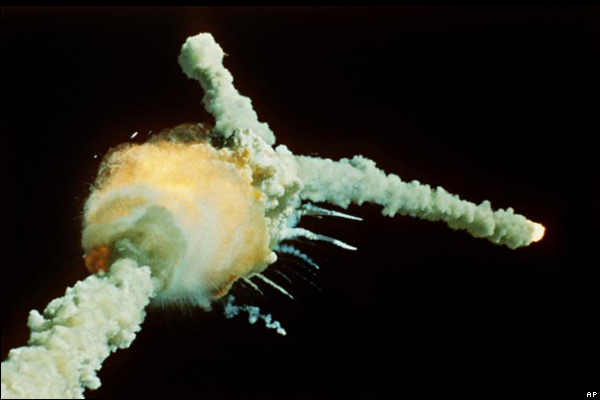 “The shuttle blew up.”

When my friend Robbie told me that in the afternoon of January 28, 1986, I thought he was kidding.  I may have even said “You’re kidding,” in response.  For a ten-year-old who’d been fascinated with space exploration and NASA ever since he first asked his father what those little twinkling lights in the night sky were, and indeed for a country accustomed to unqualified success in the exploration of space, it was a kick to the gut.  The Space Shuttle Challenger, lost only a few moments after launch on a beautiful Florida morning.  How could this have happened?  Over the months and years that followed we’d learn about SRB’s, Morton Thiokol and O-rings and shake our heads at the realization that a faulty piece of rubber could have cost the lives of seven courageous astronauts (including the first schoolteacher in space) and dragged the triumphant American space program into a downward spiral of limited ambition.

It’s perhaps a lingering tragedy of the human experience that we quickly become inured to being awed, that the miraculous can become routine in the course of time.  The Apollo program ended when the voices questioning its cost finally became the majority, when it seemed that after achieving the ideological goal of beating the Soviets, the moon was “been there, done that.”  And the shuttle looked more like the beginnings of the starships we’d watched whipping across the galaxy in our favourite science fiction adventures, but its missions had become predictable, stale – Challenger and her sister ships were workhorses instead of explorers, deploying satellites and touching down again like an orbital version of FedEx.  Forgotten, largely, in that routine, was how dangerous space flight remained, even after nearly thirty years.  Until 1986, no American had ever died in space – the fire that claimed the lives of the three Apollo 1 astronauts occurred during a routine test on the launch pad.  Even the infamous Apollo 13 “successful failure” returned its crew unharmed.  It was inconceivable, even as we looked at that strange image of the two-pronged trail of smoke in the sky that such a thing could happen, given the reach of our technological genius.  When it did, we were shattered, and we stepped back.  And failure became a meme – telescopes broke, probes disappeared without trace and Columbia broke apart, killing its entire crew (including another first, the first Israeli astronaut), on re-entry in 2003.

Twenty-seven years after the Challenger tragedy, the space shuttle has flown for the last time.  In a political climate where the number one obsession is deficit and debt, the expensive notion of space exploration, where the financial return on billion-dollar missions is difficult to explain to the Tea Party congressmen who control NASA’s budget, is unpalatable to say the least.  Yet the promise and the appeal of what waits up there remain potent and meaningful, and retain their ability to stir the soul and set dreams alight.  Over the last several weeks Canada’s astronaut Chris Hadfield has been tweeting from the International Space Station, offering stunning pictures of our world from high above, where one cannot see a single trace of war, hunger, poverty or pop star shenanigans – merely the peace of a beautiful planet.  Hadfield nearly broke the Internet with his much-retweeted exchange with William Shatner, advising the “Captain” that he was in standard orbit and detecting signs of life.  When considering the scope of the universe beyond our little world, our recurring conflicts over lines on maps and ever-dwindling resources seem to be the apex of Lilliputian pettiness and futility.  Yet we still hope.  Could the final frontier unite us as everyone who’s ever seen an episode of Star Trek hopes it will?  Could we at long last stop obsessing about who has the most toys and instead devote those energies toward a higher pursuit?

It seems to me that when Challenger died, much of our collective imagination went with it.  We chose to cut back, to scale down, to play things safe.  To outsource much of the work and the risk to the same Russians everyone was once desperate to defeat in the cosmic theatre.  When it comes to the exploration of space, we think small, cheap and forgettable.  Newt Gingrich absorbed his fair share of ridicule for suggesting during the GOP presidential primaries that the U.S. should try to build a lunar colony, and as far-fetched as that might seem, so was John F. Kennedy’s declaration in 1961 that America intended to land a man on the moon and return him safely to the earth by the end of the decade.  Between promise and realization it took 8 years.  What’s even more frustrating is that when Kennedy spoke those words, scientists had no idea how to accomplish the task.  Today, we have all the technology we need to get us back to the moon or to Mars or even beyond; we lack only the will to do so.  (The cynic in me believes we might get there faster if one of these heavenly bodies is proved to contain vast reserves of oil.)

In his commemorative address offered to the nation on the evening of January 28, 1986, President Ronald Reagan spoke about the sacrifice of the Challenger crew and promised that they would never be forgotten; that the exploration of space would continue.  Yet I don’t believe that the lethargic careful dipping of our toes into the interstellar ocean is paying tribute to them in the way the substance of Reagan’s speech intended.  We should be doing more.  If humanity is fated to disappear from the universe without ever spreading itself beyond the confines of the pale blue dot it inhabits, it will be solely because of our lack of will.  Do we truly want our epitaph to be a Douglas Adams-esque pronouncement like “Galactic Chickenshits”?  Or is getting the chance to touch the face of God, as Reagan described it, worth the risk?  The Challenger crew believed it was.  The Columbia crew believed it was.  Deep down we know it is too.  The greatest tribute we can pay those who have lost their lives is to make their sacrifice mean something – to go on, to shake off the creep of apathy and to continue charging toward the blinking lights in the night sky on a tail of flame, carried by our science and propelled by our dreams – for they, like the spirits of the Challenger crew, truly have no limits.