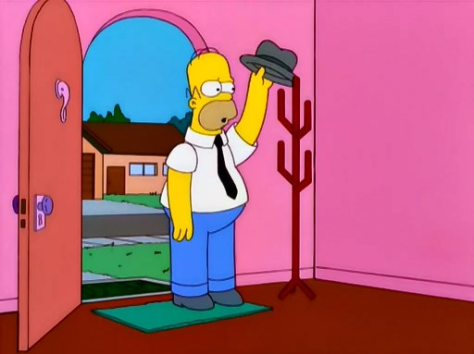 One of the easiest things in the world there is to do is not write.  To let yourself become so utterly consumed by the drudgery or drama of your life that your laptop gathers an incrementally thicker coating of dust next to your bedside table as you slump deeper into your living room couch under the weight of your cat and daily justify the inertia with a half-hearted “maybe tomorrow.”  Before you know it, days have become months and there’s absolutely nothing to show for it.  You wake up and think about everything you could have done with the lost time and didn’t.  And you wonder why you’re no closer to achieving your goals, why those white posts still seem to gleam just as far away, over a stubborn, spiky hill.

I used to follow a political blog that had a nifty quote in its header:  If writing is a muscle, this is my gym.  One can marvel at the productivity of one’s peers and try to figure out how they manage it, but it’s the exact same feeling as wishing one were thinner, stronger, etc.  If something is that much of a priority to you, then you simply make it so, and the more you do it, the better you get.  By the same token, lack of regular use will cause that muscle to atrophy.  Progressively, it will get harder to say what you mean with the flair you once wielded like a lightsaber, and you’ll start to feel like that the precious nuance of your native tongue is suddenly as foreign to you as ancient Sumerian.  That will be really, really, really… bad.

At the same time, being away from it leads you to question your relevance in the ongoing conversation.  In an era of infinite cloned hot takes fired off in the wake of every act of presidential incompetence or goddess knows what else has grabbed people’s attention this minute, is it really worth the grind to try to grab the waterski rope as it whizzes by, for little reward more than a few extra notches in your stats?  When you’re already inclined to a persistent state of self-doubt, the thought of going through the motions to produce something that few will read and fewer will care about is as daunting as eyeing that bench press in the corner of the room and thinking about the long, sweaty, aching slog it’s going to be to build up your strength again, to reconnect with whatever audience you ever thought you had.

There comes a singular moment, however, when, scatologically speaking, you have to either defecate or remove yourself from the appliance.

It comes when you recognize that perhaps the reason why you have felt so listless over the past couple of months is that an important part of you is missing.  Against your better judgment you’ve let it slide away.  You’ve convinced yourself that you’re not good enough and that the success of contemporaries, rather than inspiring you, is taken only as a reminder of your own failures.  Over the last couple of months I’ve seen friends and acquaintances release books and land publishing and even movie deals and I’ve wallowed in my idle reads counter on Wattpad, with that damn nattering “see?” voice stifling my willingness to suck it up and try again. There’s another good saying, that professionals are nothing more than amateurs who never gave up, and if your peers didn’t give up, then why should you?  Especially when the precious act of putting one word after the other is a cheaper and more legal source of endorphins than anything else you might choose to pursue.

So, for the tl;dr folk, here’s the short version of the announcement:  whether you missed me or not, I’m back.

Baseball season is winding down and my beloved Blue Jays look unlikely to make the playoffs this year, but that certainly isn’t the only thing to write about (even if it seems like it’s been my exclusive focus when I have bothered to plant my arse at the keyboard in 2017).  Despite Drumpf doing his damnedest to ruin everything everywhere for everyone, this is still a beautiful world with a bursting reserve of beautiful stories to explore and to experience.  Our goal shouldn’t be to just wow passersby with the sharpness of our snark or force open jaws at the erudite manner in which we describe hating his bloated breathing guts, but to give someone who offers us a few moments of their attention an experience that leaves them feeling lifted and renewed.  That’s my goal, anyway.  To try to push the message that descents into the depths are never one-way, that there is always a path up the other side.  In fact, I’ve been gathering my thoughts on that subject for the last little while and I’m pretty close to starting off on a brand new novel that will aim to deliver that very message.

Will it be a challenge to work on that book and maintain a regular blog presence (and work a nine-to-five all the while)?  Sure, but as I used to tell my kid, no one ever looks back on their life and wishes that they’d watched more TV.  I can’t promise that everything I write will be a heartbreaking work of staggering genius; I’m sure, in fact, that the first few steps out of the gate again will be epic stumbles.  But the muscle will continue to build, slowly and surely, and eventually, we’ll be busting down brick walls.

As always, I’m glad to have you along for the ride.  Let’s see if we can’t go somewhere new and interesting on it.