I feel as though I have been writing a lot of tribute pieces lately, both for people I’ve known and those whose stories have come to me through the perpetual tide of information that is our 21st Century, digitally connected world.  Today, on what would have been his birthday, I’d like to spend a few words on someone who wouldn’t have known a Tweet if it pecked him in the eye – my grandfather, Jack.

It seems to be a recurring theme of my life that some of my closest family bonds have been forged with people I’m not physically related to; the same goes with the only grandfather I ever knew.  My mom’s father passed away when I was three, and my paternal grandpa died before I was born.  Jack himself had another family before encountering my widowed Nana.  Born in 1927 as the second oldest of four, he served in the Canadian Air Force and worked most of his life at a packaging company in Toronto – back in the era when you worked at one company for life and retired at 65 with a healthy, well-earned pension.  His first marriage, while ending sadly in divorce, did see him have one son, with whom he’d have a complicated relationship until the very end.  He met my grandmother in the late 70’s, and they were inseparable from then on, dividing their time between his cottage home in Muskoka and her winter retreat in Florida before finally tying the knot just a few short years before her passing in 1993.  But to us, he was always “Uncle Jack.”

I wish I had more to relate about his history, but that was Jack – unlike the yarn-spinning stereotype of the happy grandpa, he rarely talked about his past.  He did like to chat, but the stories were always recent, within the last few months.  Jack never once talked about the war, or his first marriage.  He was very much a man who bore his history quietly, preferring to live in the moment and look to the future.  One of the stories I do remember fondly was his tale of his exploits at the aforementioned packaging company.  I don’t recall the name of the firm (or whether they even exist anymore), but they handled printing the boxes for several large corporations, one of which was Labatt’s (one of Canada’s biggest beer companies, for the uninitiated).  After a long night printing boxes of Labatt’s Blue, it was time to swap out the plates for the next run, which happened to be for feminine hygiene products.  However, apparently the ink had become saturated in the rollers and when the machine started up again, boxes of “Labatt’s Maxi Pads” began tumbling off the line.  (I’m all in favour of brand diversification, but that might have been a stretch of a sell.)

After my father died, Jack was the man I looked up to, and even though I only saw him five or six times a year, he did his best to fill that mentoring void.  And frankly, there were times I resented it.  I didn’t understand why whenever we visited his cottage, I’d be stuck helping him rebuild his bathroom on a sunny hot day while my mom and sister got to play in the lake.  I hated being reminded constantly to stand up straight or hold the door open for the ladies first.  For a while I thought he just didn’t like me, or that he was trying to make up for his awkward relationship with his son.  Yet the lessons were seeping through – the love of the peace of nature, the appreciation for the music of the past.  Practical skills like the few handyman tasks I actually know how to do, how to tie a tie, how to drive a car.  But above all else, the abiding respect for women.  If my father planted the seeds in me of what it means to be a man, Jack taught me how to be a gentleman.  He was a sterling example of how to carry oneself with dignity, poise and confidence, in the old-fashioned manner that most will agree has been lost nowadays, to our detriment.

When he sold that cottage on Muskoka’s Birch Island, I was furious.  It was a formative piece of the world for me – we’d spent a part of every summer there and even a few winters, back when it got so cold that the lake froze over solidly enough to drive across.  I learned to fish, windsurf and drive a boat there.  I developed my first real crush on a girl there – the beautiful and wild Christine Moody, whose family owned the cottage next door.  (You can imagine how damaging to a young ego it was to learn later that she actually dated the elder son of the couple who bought the place from Jack).  I can close my eyes and picture with laser-like clarity the smell of the air, the sound of boats driving by in the night and recollect the emotions I felt in almost every step I took up the winding, woodchip-strewn path, lighted by lamps that resembled giant mushrooms.  I could not believe it wouldn’t always be there, and I know I was angry with Jack for a while because of it.  In August of 1989, on our final visit to Birch before its new owners took possession, I decided I wanted to do something special as a final goodbye to this magical place.  Across the water from Jack’s dock was a much larger island, probably about half a kilometer away.  Years earlier my father had swum that distance, and I wanted to pay tribute to him by doing the same.  Despite my chilly, immature sentiments toward him for selling “my” cottage, Jack drove me across in his boat, I hopped out and began swimming back.  He stayed alongside me the whole way, until I climbed wearily out onto his dock again to the smiles of the rest of my family.  A quiet guardian, never too far from view; that was Jack.

He was with me at every atrocious school band concert I ever played in.  He was with me when I went off to university for the first time.  Even as I grew older and we fell out of touch for a while, he was with me.  Jack was fortunate that in his last few years he had the company of a truly remarkable woman named Fran, whom we still talk to and visit from time to time.  At my wedding six years ago, Jack and Fran were caught in traffic and were late.  They caught only the tail end of the ceremony.  Jack’s health had started to waver and he wasn’t the sturdy, imposing man with the rock solid handshake grip I’d always remembered.  At one point during the reception, after my new wife and I had surprised the guests with our choreographed first dance (a cha-cha to Keith Urban’s “Somebody Like You”) he came up to me, shook his head and whispered two words that remain with me to this day.  A rare display of emotion from a fairly private yet thoroughly good-hearted old man who’d taken this dumb kid under his wing and made it his responsibility to be the best role model he could be.

How do you respond to something like that?  You don’t.  You give your dear old grandpa the biggest hug you’ve ever given him in his life.  And you carry those words with you to the last of your days.  Reflecting on Jack today I wish I’d been a little more patient with his lessons, wish that I hadn’t been so preoccupied with my own juvenile troubles that I’d taken more interest in his life and learned more of his history, that I might be able to share it with his great-grandson.  We kind of assumed that Jack would always be there.  I guess in many ways he will be.  You just have to lift your head from the water and look to your left.  He’ll be steering that red and white boat with the 70 horsepower Evinrude outboard motor alongside, keeping your course straight and true. 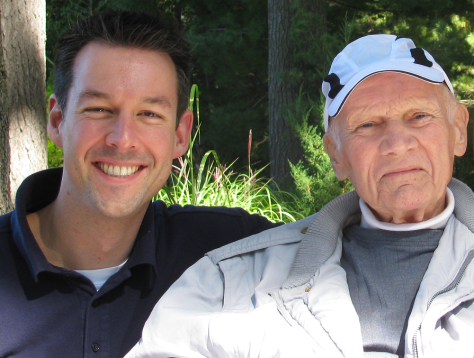