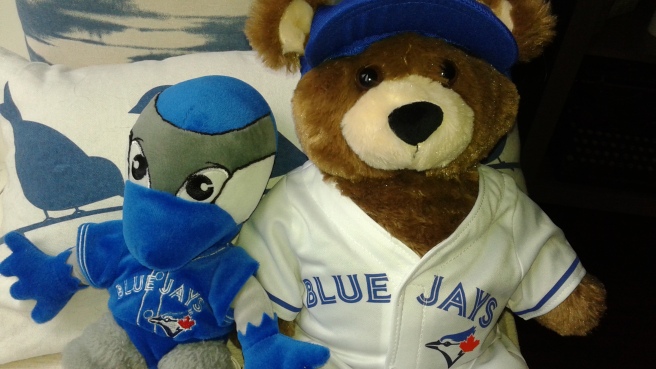 This is the indisputable truth whenever two teams step onto the field.  Hardly anyone ever just roots for a good clean game; you’re always hoping your guys make mincemeat of the others.  Before the first pitch flies, when the score is at zero, both squads have the exact same chance to walk off nine innings later with fists pumping the air.  And sometimes you have to swallow that sickening churn in your gut as you watch the other guys do it.  It’s regrettable that the effort and the drama of a 162-game season has to come down to a single pitch, a single swing of the bat, but that is the magic of baseball.  That was how it was in 1993 when Joe Carter won the World Series with his three-run blast to left field.  That’s how it was, with a far more bitter taste, in the heartbreaking ALCS Game 6.

So the incredible saga of the 2015 Toronto Blue Jays ends with Josh Donaldson grounding out to the Kansas City Royals’ Mike Moustakas, with Dalton Pompey and Kevin Pillar stranded at third and second, the Royals victors by a single run achieved by what was admittedly a terrific piece of baserunning by Lorenzo Cain in the bottom of the eighth.  While it would have been wonderful to watch our guys pull ahead and force a Game 7, it wasn’t to be.  The Royals will now take on the New York Mets for the World Series crown.  And you can’t begrudge the Royals for it, either; the ALCS came down to two formidable, equally-matched teams, and while from a statistical perspective you could make a legitimate argument that the Blue Jays were a better team, the Royals simply outplayed them.  They pushed harder, made better use of their scoring opportunities, silenced the Jays’ bats with their world-class bullpen.  The Jays went 0 and 12 with runners in scoring position in Game 6, so you can’t suggest they didn’t have plenty of opportunities to break out a big lead; they just weren’t able to come through.  And that’s not their fault either – sometimes, stats and history can be on your side and yet, plain dumb luck isn’t.  There were a few questionable calls in the game that Jays fans will be wringing their hands over all winter; the waaaay outside second strike called on Ben Revere in the ninth that had him smashing a trash can in the dugout after he whiffed on the next pitch, and a certain bearded young Royals enthusiast who picked what could have been only a double off the outfield wall with his glove and gave the aforementioned Moustakas a dubious home run in the second (I wouldn’t suggest that fan try visiting north of the border any time soon).  Chalk it up to those fickle gods of baseball again; just as often a bad call can break in your favor.  But it is what it is.

As always following a season-ending loss, the temptation to point fingers will be strong.  But just as a man should be remembered for the sum of his life’s achievements and not just how things go on his last day, so too should fans set aside bruised feelings and remember the 2015 Toronto Blue Jays by the sum of the amazing moments they gifted us with throughout a remarkable season, and the goodwill and unity they brought to a city and a country that needed it badly.  For me, there are a few distinct images that will stand out for years to come:

We’ll remember the disappointment, too, the swings and misses and the lost promise of a World Series crown that will have to wait until October of next year.  But if nothing else, 2015 will be remembered as the year that the Blue Jays shut the door on 22 years of mediocrity and transformed into genuine, fearsome contenders, unable to be dismissed any longer as that average Canadian team that used to be great.  Specific feats cannot be denied:  they won the brutal American League East division and came back from the brink against a tough Texas team to claim the ALDS.  But we saw it too in the way those 25 roster members embraced each other, young and old, newcomers and veterans, and dedicated themselves to the pursuit of a singular goal, collected egos set aside.  R.A. Dickey said that “it’s amazing what you can accomplish when you don’t care who gets the credit.”  For a team with only three native-born sons, the attitude was somehow uniquely Canadian of them.

And Canadians responded.  As their oft-trending hashtag urged, we came together.  The Blue Jays became Canada’s team.  We unleashed a pent-up emotion that was searching all these years for a floodgate through which it could burst.  We finally forgave the hurt that festered from the 1994 strike, we forgot about hockey and filled the stands again to share in the glory and the occasional agony.  There will be kids in tiny Toronto jerseys who will grow up remembering the 2015 Blue Jays as “their” team, and comparing every year that follows to this – just like those of us who came of age with 1992 and 1993.  While the roster will change next year as new faces arrive and old favorites move on, there will always be something particularly special about this iteration of the team, and we’ll look back at them with a reverence that they truly deserve.  In the end the World Series or lack thereof doesn’t really matter.  The Blue Jays have already won victories that can never be taken away.  This was the team that made me a fan again, that made many people across this country fans, either again or for the first time, and as far as I’m concerned, things can only get better from here.  The boys in blue are back.